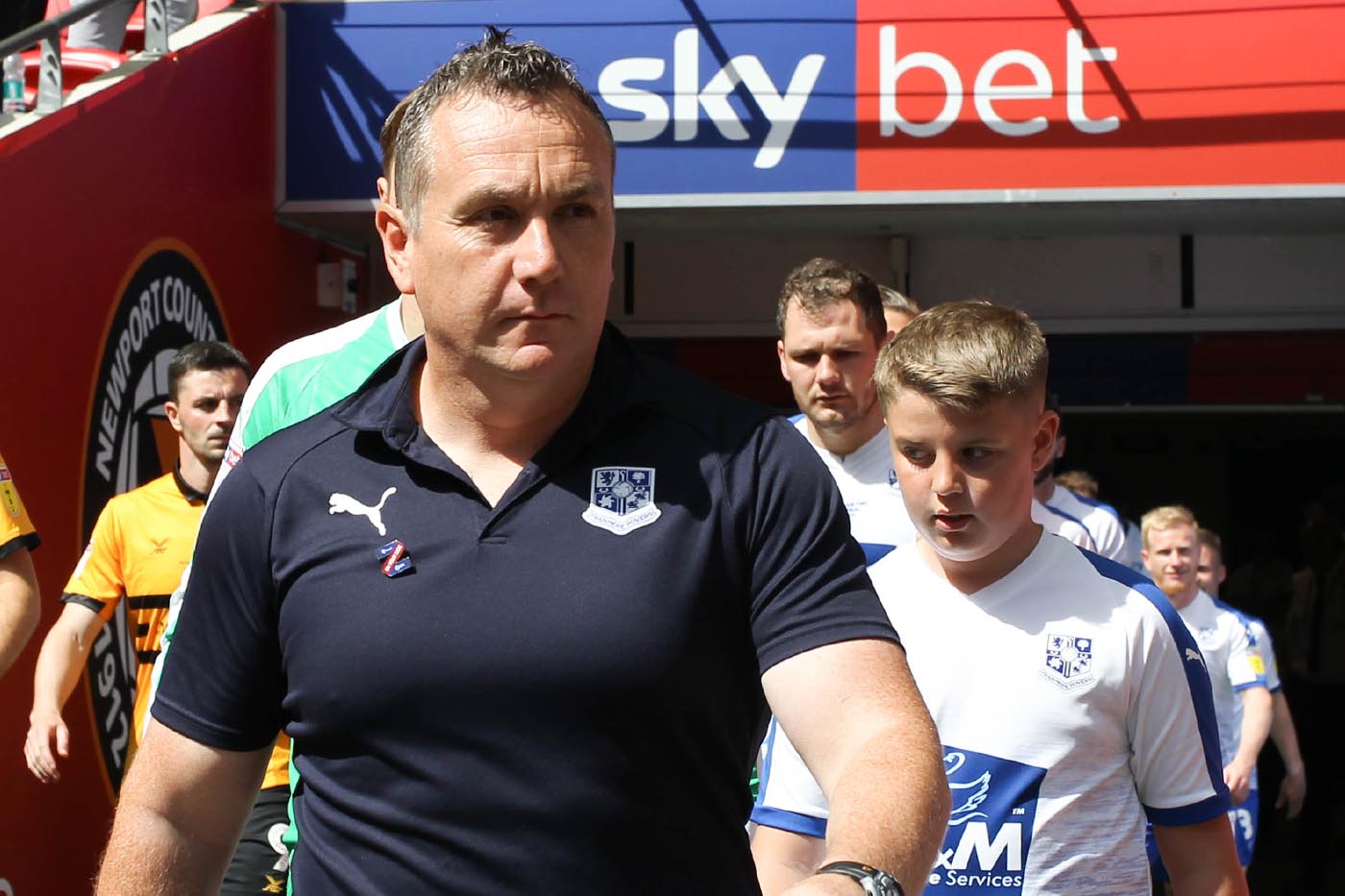 It seems like only yesterday that last season ended and we are now a few days away from the start of the new campaign.

Of course, Tranmere prolonged last season with a run to the play-offs which ultimately ended in promotion at Wembley with a 1-0 extra time victory over Newport County on May 25.

Fast forward nine weeks, and the League One season is upon us.

A new league, a new team, but hopefully the same outcome as the last two!

We’ll go on to analyse Rovers’ chances of a third successive promotion as the article progresses, but let’s have a quick look at the pre-season Micky Mellon’s side have had first of all.

Pre-season form can be over-analysed at times. Fantastic results in pre-season doesn’t necessarily equate to a fantastic start to the new season, and vice versa.

The main thing that Micky Mellon and the players will have been looking to get out of the pre-season friendlies is fitness and match sharpness, alongside new players bedding themselves into the group and gaining the understanding of the way the manager wants the team to play and how their team-mates operate too.

Many of the players who are likely to be regulars in the team, you’d think, have got good minutes under their belts. The likes of Connor Jennings, David Perkins, Manny Monthe, Scott Davies and Ollie Banks have had good game time and that will stand them in good stead for the season ahead.

The concern is the injuries that have been picked up. Jake Caprice and Ishmael Miller took knocks in the final pre-season game last weekend, added to Mark Ellis and Evan Gumbs who sustained long-term injuries last season and remain unavailable plus Corey Blackett-Taylor and Calum Woods who haven’t played due to injury in the past few fixtures, and that is a genuine worry.

Results have been poor in pre-season, but as I mentioned before, too much can sometimes be read into that. One victory, one draw and four defeats is the record Tranmere take into the new campaign, with a behind closed doors win over Burnley and a 0-0 draw against Walsall last time out the two positive outcomes from the six matches.

The worrying feature from the friendlies has been a lack of goals scored. Rovers have only hit the net in two of the six games. One against Livingston, which apparently was a block by Paul Mullin from a goalkeeper’s attempted clearance (no video evidence, though) and three against Burnley, again behind closed doors and no video seen.

The other four matches have seen Tranmere draw blanks, although chances have been created and, at Carlisle in particular, there were a few near misses.

Hopefully, the form in front of goal improves starting on Saturday!

The main departure of the summer was striker James Norwood to Ipswich Town. His 30+ goal tally last season played a big part in Rovers’ success and getting us back into League One, and his departure leaves a rather big gap to fill.

The aforementioned lack of goals shows that. We’ll come on to new signings shortly, but it’s a difficult act to follow and unlikely that Tranmere can replace those 30-odd goals in just one player, rather looking to two or three to step up their goals contribution to aid the cause.

Steve McNulty has also departed Prenton Park and has joined York City. The big man did a hell of a lot for us, stepped up when he came on in the play-off final in May and his contribution cannot be underestimated.

It, perhaps, wasn’t a big surprise to see him leave, but his influence around the place, even when he wasn’t playing, will be missed for sure.

Jay Harris and Adam Buxton are two others who have left having contributed a lot to our recent success.

Zoumana Bakayogo, Chris Dagnall, Cole Stockton, Ben Tollitt and Paddy Wharton have also left the club, while Jonny Smith, Ben Pringle and Luke McCullough have returned to their parent clubs or haven’t had deals extended with Rovers after their loans at Prenton Park last term.

There has been a lot of transfer activity over the summer, with plenty of new faces coming into the club.

Let’s, first of all, look at the players brought in up front to try and replace the goals of James Norwood.

Ishmael Miller will feel like a new signing. He was originally brought in last January but played just a game and a bit before injury curtailed his season. He’s signed a deal up until next January, but once again, has picked up an injury.

If he stays fit, it seems a big if at the moment, he could be a really key player. He’s big and strong, can hold the ball up and bring others into play, but also has good pace to get in behind defences too. Miller doesn’t possess the greatest goalscoring stats but could prove to be a good foil for the likes of Paul Mullin to play off the big man.

Stefan Payne has been brought in from Bristol Rovers. Another target man-type, Payne could be a useful addition to the squad. But like Miller, his goalscoring record isn’t the greatest, appearing to be more suited to playing alongside someone with a bit of pace to link up with.

Jordan Ponticelli has also joined on loan from Coventry City. The 20-year-old attacker doesn’t have a great deal of senior football behind him, so is a bit of an unknown quantity. A number of substitute appearances for the Sky Blues and a brief loan with Macclesfield Town last season is the sum of his career to date.

Time will tell if those players can help fill the void of Norwood’s departure. There is still time in the transfer window for the manager to bring in players, and another forward could well be on his wanted list, we’ll see.

In defence, it is pleasing to see Sid Nelson turn his loan into a permanent transfer. He was excellent when filling in at the heart of the Rovers rearguard at the end of last season, and if he can continue to show the improvement he demonstrated in those matches, we’ll have a top player on our hands.

The manager has also added George Ray and Calum Woods into the defensive ranks. Both players bring good experience with them. Ray was captain at Crewe while Woods has promotions under his belt with Dunfermline, Huddersfield and Preston.

Another experienced player, Darren Potter, has been brought in. The midfielder started his career with Liverpool and has that bit of class in the midfield which we can expect to see. Approaching his latter years in the game, perhaps, but I think this will be a good signing.

And finally, we’ve added a couple of exciting wide players in Corey Blackett-Taylor and Kieron Morris.

Blackett-Taylor has been on the manager’s wanted list for some time and is a quick and tricky winger who will excite the Rovers fans. Sadly, injury has blighted his pre-season, but once fully fit, he will be one to watch this season.

Meanwhile, Morris signs a permanent deal after an impressive loan spell at the end of last season. A player possessing decent pace, a good left foot and an eye for goal, Morris will be looking to continue where he left off.

Three players who I think will be vitally important for Tranmere this season are Scott Davies, Connor Jennings and Corey Blackett-Taylor.

Defensively, Rovers have been strong in the past few seasons and it’s in no small part due to the man between the sticks. Scott Davies picked up the Golden Gloves for the most clean sheets in League Two last season, and keeping out opposition strikers will be important if Tranmere are to enjoy any type of success this term.

Connor Jennings has been superb since joining Rovers in 2016. His work rate is second to none and he pops up with important goals like the one at Wembley! Feel we need him to contribute a few more goals this season, which he is more than capable of.

At Tranmere, we love our wingers and I think Corey Blackett-Taylor has all the attributes to endear himself to the Super White Army. Pace, power and skill will make him a nightmare for League One full-backs, hopefully, he can recover from his pre-season injury problem to make a big impression in a Rovers shirt.

There are a number of big clubs in League One. Sunderland, Portsmouth, Coventry City to name but three. It’s a big step up and is going to be a big challenge, but similar things were said at this time last year, and we know what happened then.

The goalscoring issue in pre-season is a bit of a concern. More goals from midfield would be something I’d be looking for, and with the players we have in there, there’s no reason why more goals can’t come from that area.

It will be interesting to see if Micky does any more business before the transfer window closes, too. With the injuries we are currently suffering with, the squad looks a little light in numbers, so we’ll look on with interest to see if there’s any more business to be done.

A season of consolidation would be very satisfactory.

These big names will likely feature for Liverpool at Prenton Park

Author Paul HarperPosted on January 24, 2020January 24, 2020
Tranmere Rovers play Manchester United on Sunday. Just let that sink in a moment… After a brilliant performance to knock out Watford in the...
Read More

What to do with a free Saturday afternoon?

Author Paul HarperPosted on August 23, 2019
Due to Bury’s financial failings, Tranmere’s League One fixture on Saturday at Prenton Park has been suspended. So, this begs the question, what are...
Read More

Author adminPosted on March 1, 2018March 1, 2018
For Tranmere fans looking to get an additional dose of Rovers content, there is some good news. A brand new unofficial podcast will shortly...
Read More

Let’s make it our moment

Author adminPosted on May 11, 2018May 11, 2018
The time has come for us to make our pilgrimage to Wembley once again. It’s a massive occasion, one we must come through. Ten...
Read More

Author adminPosted on January 6, 2018January 8, 2018
Tranmere stopped the rot after the 5-2 defeat on New Years Day by securing a 1-1 draw away at Barrow with a fairly dominant...
Read More

Hill sacked as Rovers turn back to Dawes and Parkinson

Author adminPosted on May 11, 2021May 11, 2021
Tranmere have sacked boss Keith Hill this morning in a move that may shock many in football – but the truth is, it was...
Read More